One of the Twitter accounts I follow is New New York Times, which automatically tweets words that are published in the NYT for the first time in its history. (Very often, they are typos.) Here's one that caught my eye:


Two of the other Twitter accounts I follow respond to these one-word tweets. One is NYTfirstsaid Context, which gives the context for the tweet, in this case:

[imitating Trump] When it comes to being negative, my test was extremely positive, because, not to be negative, but, being positive would be super negative, and I wouldn’t want to not be unnegative. Of that, I’m positive — in a negative way. — STEPHEN COLBERT

In other words, it's a comedian's imitation of Trump's claim that he "tested positively toward the negative" for coronavirus. This is a man whose ego is so fragile (and intellect so limited) that he doesn't want to classify himself as anything negative, even when it's a good thing to be negative.

The last post here was about unalive versus alive and dead, where something unalive isn't necessarily something that's dead because in order to be dead you have to have been alive, whereas in order to be unalive (in the sense used in the cartoon), you presumably don't. You can be in the class of things that are not alive.

But is unnegative anything other than positive? And is the opposition, like dead/alive, restricted to a particular domain? Various things could be positive or negative, but when we shift from one semantic domain to another, things seem to change.

When positive/negative are applied to numbers, there's a middle ground between them: zero.

Here unnegative would presumably refer to the numbers {0, 1, 2, 3...}, unlike positive, which refers to {1, 2, 3...}. We could call negative/unnegative a privative relation, where unnegative just means the absence of negativity. It works as a contradictory antonym (if a number is not negative, it's unnegative and vice versa), where positive/negative doesn't quite (because of zero).

I think we'd have to call this type a non-gradable contrary antonym pair. Contraries have a middle ground (can be neither X nor Y), but they are usually properties that exist to greater or lesser extents (gradable). You can be neither tall nor short because you can be an unremarkable height, but even if you're short, you can be taller than someone else. But +3 is not "more positive" than +1. It's more than +1, but not more positive than this. The thing is, the way many people talk about contraries, you'd think they were always gradable, so it's a bit funny to talk about non-gradable contraries. (John Lyons talks about non-gradable contraries with respect to directional opposites. And indeed this seems to be a kind of directional opposite.)

In the context of medical tests, there seem also to be three possibilities (putting aside the possibility of not taking the test): positive, negative, and inconclusive. An inconclusive result for a test could be classed as an unnegative result, so in that case unnegative ≠ positive.

But "inconclusive" is not really a middle ground, and it's not the same as the reality of whether one has the disease, it's "We don't know". In terms of who has a disease or not, positive/negative is complementary: you either have the virus or you don't. It's yes or no with no maybe.

The last of the NYT-neologism Twitter feeds I follow is called NYT Bibliography and it documents how many times the new-to-the-NYT word has occurred in Google Books. There was no such tweet-response yet, and so I looked for myself and found...

...nothing. I was really quite surprised. I checked for it with a hyphen (un-negative), just in case and got none that way either.  Congratulations to Stephen Colbert for not only getting the word into the NYT, but for being so original.

Googling the word more generally brings up more hits, many of which are hyphenated. They mostly relate to the semantic domain of emotional states.  There's even an @unnegative Twitter feed, and I found its profile description interesting: 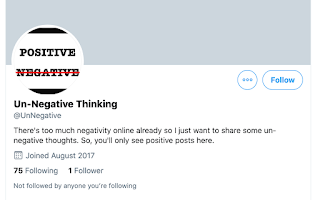 I was kind of hoping that the un- in this un-negative would be the verb prefix, which means 'reversal' rather than 'not'. (When you untie your shoes, you don't not-tie them.) I had hoped this person was going to unnegative the news for us. But they're definitely using it as an adjective, and they have excluded the middle between positive and negative: unnegative news is positive news. No neutral news here.

Anyhow, that's a smidgen of what goes through my head when a one-word tweet comes into view.
Posted by lynneguist at 13:22 1 comment:

But try to use dead/alive as an example in a classroom or a textbook, and someone will say "what about vampires?" For them, we have the category of the undead. Is dead the opposite of undead? Or is alive?  (I'll always answer such questions with 'depends on the context'.)

Not or the prefix non- put things in contradictory (or complementary) relations to one another regardless of the semantic domain.

What xkcd gives us in this comic is alive/not-alive. But although there's a firm line between the two,  it treats both as gradable states, where prions and viruses are not alive, but rocks are really not alive. The upward scale seems to be based on animacy and perhaps similarity to humans, while the downward scale mixes up criteria a bit more. I'm not entirely sure that I consider a prion to less not-alive than a rock with a face. In terms of things I'm likely to worship, the rock with a face comes higher, and surely I'm more likely to worship the less not-alive? 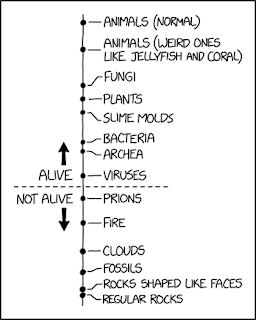 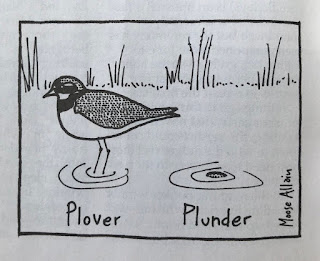 Posted by lynneguist at 10:47 No comments:

'nice' is the opposite of 'dick' 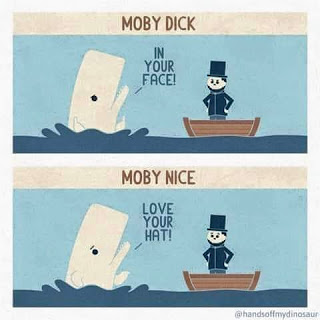 Posted by lynneguist at 16:22 No comments:

Email ThisBlogThis!Share to TwitterShare to FacebookShare to Pinterest
Labels: cat/dog

This is not the first opposite that's been recorded for Indonesia on this blog. Have a look at this one.
Posted by lynneguist at 10:38 No comments:

Posted by lynneguist at 16:10 No comments:

Dinosaur Comics has a guest artist and a comic I love: 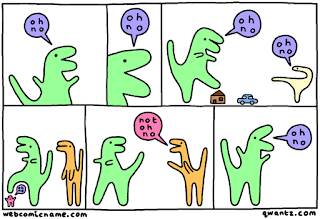 Posted by lynneguist at 15:47 No comments:

What's this blog about?